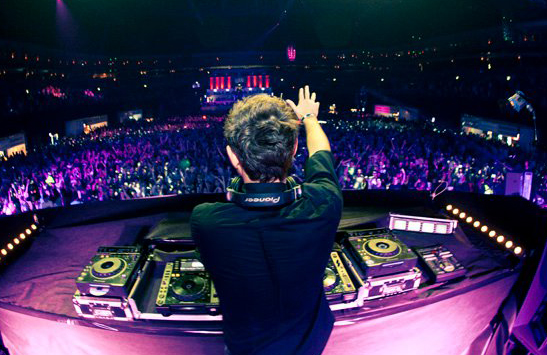 “But when God, who set me apart from my mother’s womb and called me by his grace, was pleased to reveal his Son in me so that I might preach him among the Gentiles…”  – Galatians 1:15-16

When Jesus saved me, I was a club DJ, and fully engaged in the lifestyle one might expect from a club DJ—late nights, drugs, and partying. I had a foul mouth, a sharp tongue, and a deep-rooted insecurity that affected everything I did.

In comparison to some of the characters in the Gainesville bar scene, I was a pretty decent guy. But I was also extremely moody and emotionally unstable. I carried deep pain on the inside that made me touchy and explosive. I didn’t realize any of this, of course, but anyone close to me could tell you, I was a very cranky and irritable person.

I wasn’t a Christian-kind-of-guy, in any way. I had never owned a Bible. I hadn’t grown up in a Christian home. I can’t even remember knowing any Christian people. Actually, the thought of a “hardcore Christian” gave me the creeps.

But like Paul shared about his own experience, “when it pleased God… He revealed his Son in me that I would proclaim Him.”

In many ways, I feel like I accidentally became a Christian.

At my father’s deathbed, I had this spiritual experience. And I just couldn’t shake it. Even when I wanted to go back to my old life, I had this growing, inner knowledge of His reality, goodness and presence that I couldn’t get rid of. In the midst of all my darkness and wild living, Jesus opened my heart to Him. “He called me by His mercy and grace” alone.

So how did I become a Christian?

Again much like Paul, “when it pleased God… He revealed his Son in me so I could proclaim Him”.

The Events Leading Up to My Dad’s Passing

During my first semester at the University of Florida, I started to hear about “God stuff” happening around my dad, who had been diagnosed with cancer a year before. I heard about signs from God and genuine Christian people coming around him and praying for his healing. I was blown away that my dad was open to something like that.

Then about two weeks before Christmas my dad passed away, I had a brief, but powerful encounter with a Christian on a bus. He witnessed to me and offered to pray for my dad. I write about it here.

A few days later after talking with the young man, I came home for Christmas break and saw my dad’s genuine faith. Without really knowing what I was doing, I started “proclaiming” God to my dad. Maybe this was first “sermon”. But I shared with my dad about the young man I had met on the bus. I encouraged my dad that my encounter confirmed everything my dad had started to believed. I spoke to his faith— that God was real, and where he was going was real.

When my dad passed, I was in my bedroom. The hospice nurse came in to get me, and she had a testimony herself. She told me how a smile had stretched across my dad’s face, right as he slipped into eternity. I don’t know if this lady was a Christian, but she seemed to be deeply moved by what she had seen. When I walked into the room, I saw the smile for myself.

And then something happened in me.

The way I would describe it: it was like I could see the goodness of the Savior in my dad’s smile. In a moment, I knew Him. I knew this God who had saved my dad. And I loved Him. You see, in 2003, when it pleased God, I believe He granted me a measure of faith (Romans 12:3); it’s the same faith I have to this present hour. I’ve grown a lot since that day, but it’s the same grace in me. It’s the same faith.

So let me encourage you, God is no respecter of persons! What He has done in me, He’s able to do in you! “The arm of the Lord is not too short to save, nor his ear too dull to hear”. Jesus has died for all of us! God loved a cranky club DJ. And He loves YOU with the same everlasting love! I pray that you’d see Him for yourself, TODAY.

View all posts by ajhall.org